Police have launched a murder investigation after a man was fatally stabbed in Solihull. 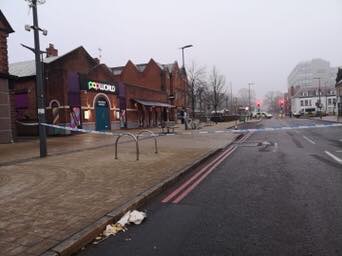 Officers were called to Poplar Road, near to Popworld and Yates Bar at 3am this morning (30 November).

A 21-year-old man was taken to hospital with serious injuries, sadly nothing could be done to save him and he died a short time later.

Extensive CCTV enquiries are ongoing and the scene will remain closed for some time while detectives carry out their investigation.

Detective Chief Inspector Jim Munro from the force’s Homicide team said, “A man has sadly lost his life at the hands of a knife and we are now working to establish exactly why this happened.

“This would have been a busy time in Solihull with many people would have been leaving bars and clubs, so we are appealing for anyone with information, who has not already spoken to us to come forward.

“We know taxis and cars were nearby during the early hours of this morning, so we are also appealing for anyone with dash cam footage to contact us as soon as possible, as this may hold key information into the circumstances of this attack.

“The man’s family have been informed and are being supported by specially trained officers.”