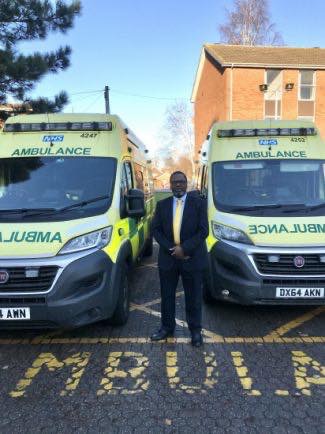 Solihull’s Ambulance Hub is to close in March 2020 despite fears frontline ambulances could be based 15 miles away in Erdington.

It had been claimed that the “politically sensitive” announcement by senior managers at West Midlands Ambulance Service had been postponed until after the general election.

WMAS has confirmed the hub – based at Solihull Hospital – will close in March.

Councillor Ade Adeyemo (Lib Dems) who stood in Solihull in the general election, expressed fears about the impact on ambulance response times, and said it was “deeply concerning” that the move could see all 60 frontline staff transferred to the Ambulance Hub at Erdington.

Built in 2007, the hub was designed to accommodate 225 staff and currently houses 430 staff, he added.

A WMAS spokesman said: “We can confirm that Solihull Ambulance Station will be closed by March 2020 and managers are now working with the staff based there as to which other base they wish to move to.

“Both staff and vehicle numbers have been rising consistently over recent years across the region and therefore the number of staff and vehicles operating in Solihull will remain exactly the same.

“The reality is that ambulances are rarely at the station, except at the start and end of their shift and during the crew’s meal break.

“The rest of the time, they are out and about in the community responding to incidents. With approximately half of patients being taken to hospital, around half of our fleet is in the community, available to respond to calls in the local area.

“The closest available ambulance will always be sent. In addition, our standby points are now seldom used because we are simply too busy. It therefore makes no financial sense to keep them open; surely it is better to use that money to invest in more ambulance crews and vehicles which actually save lives rather than a building which does not.

“The overwhelming need for patients is for us to send them an ambulance with a paramedic on board so that the crew can deal with the patient’s needs. This could be treatment at the scene or transport to another setting, such as a hospital.

But Mr Adeyemo added: “I am shocked to hear that WMAS are seriously considering the closure of our local Ambulance Hub at Solihull Hospital. This is a major blow for the residents of Solihull.

“I simply cannot believe that there won’t be an Ambulance presence in a town the size of Solihull.

“In my opinion, WMAS should be looking to build a new dedicated Ambulance facility in this area of the West Midlands. The current hub at Erdington is overstretched so the decision to close our Ambulance Hub in Solihull does not make any sense.

“What we need is a smaller Ambulance Hub – an Ambulance Station that caters for 10 – 12 vehicles, to serve Solihull, Hall Green, Shirley, Knowle and Dorridge. Instead, WMAS are looking to cut services. As a Solihull resident, I find that really worrying.

“What is clear is that there has been a massive increase in demand for the Ambulance Service. WMAS is faced with increasing staff numbers and an increasing workload.

“More government funding is also needed, especially for staff training. Currently, paramedic students are being charged £300/month for their training. This has put many of the students on the breadline with many having to use food banks.

“The facility at Erdington, which was built 10 years ago, is no longer fit for purpose and can no longer cope with the demands being placed upon it. My fear is that WMAS is failing local residents by not providing another facility in our area.

“The prospect of having to wait for an ambulance to arrive from Erdington is deeply concerning. I implore WMAS to reconsider their position and keep the Ambulance Hub and its staff in Solihull.”

Ade Adeyemo claims WMAS had deliberately held back the decision to release the details amid an election.

He says: “Unsurprisingly, staff morale at the Solihull Ambulance Hub is at rock bottom. Paramedics that I spoke to were resigned to the fact that WMAS will eventually move them to Erdington and they are rightly concerned about the negative impact on their ability to respond quickly to incidents in Solihull and the surrounding area.

“Earlier this month I was informed that no crews were available locally to respond to an emergency call and it took 19 minutes for paramedic crew from Erdington to respond to a Balsall Common resident who had suffered a cardiac arrest.

“I feel that this is deeply concerning for Solihull’s residents, many of whom are elderly.”

A ‘Save Our Ambulance Station’ petition has now been set up: http://www.solihull-libdems.org.uk/saveourambulances