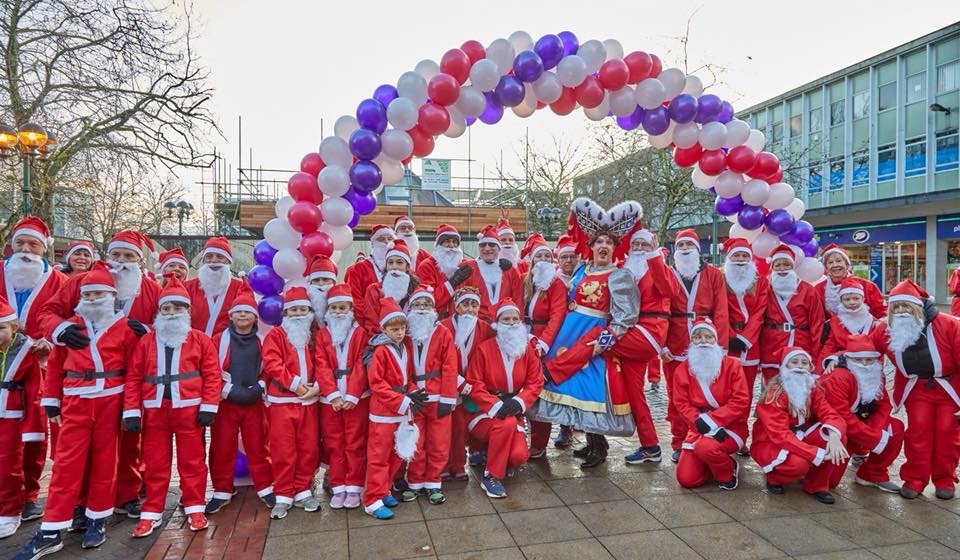 Solihull fun runners gave the gift of a brighter future at Christmas after it has been revealed over £2,000 was raised for charity at the first ever Jingle Bell Jog.

Taking place on Sunday 15th December, over 150 Santas aged between 7 and 70 were seen running through the streets of Solihull town centre in their bright-red costumes, taking part in the Jingle Bell Jog, organised by Solihull BID and sponsored by Mell Square.

Tickets and sponsorship support means every penny raised will go to Change Into Action, which encourages people to donate to charities and organisations who are able to offer expert support to the homeless.

Launched by Andy Street, Mayor of the West Midlands, the Solihull arm of Change Into Action has been in place for over six months and has been embraced by visitors and businesses in the town wanting to help restore people’s lives, giving them every opportunity to find accommodation and professional support.

The money raised by the Jingle Bell Jog will add to the £175.00 raised by Specsavers opticians through a collection tin, £2,000 raised by Touchwood and £3,000 raised by local church Renewal through a range of fundraising activities taking place in 2019.

Rob Hemus, asset director at IM Properties, owners of Mell Square, said: “We were delighted to have both sponsored and participated in December’s Jingle Bell Jog. It was fantastic to see so many people wearing their Santa suits and running, walking or dancing round the town centre for a brilliant cause.”

Solihull BID co-ordinated the year of fundraising for Change into Action after partnering with the charity to help tackle the issue of homelessness in the town centre.

Mr Hemus added: “We’re so pleased that this festive activity was able to raise vital funds for the Change Into Action charity, so thank you to all those who participated. Supporting local charities has always been important to us at Mell Square, so we look forward to continuing this in 2020 and working on future initiatives with Solihull BID.”

Andy Street, the Mayor of the West Midlands, said: “Change into Action is a great scheme that offers an alternative way to donate to help the homeless, with people knowing that their donation will really make a difference to the lives of those who are sleeping rough or at risk of doing so.

“Solihull BID has been a great supporter of Change into Action ever since we launched in the town last year, and I am delighted they have raised £2,000 to help the homeless through the Jingle Bell Jog.

“The fight to tackle homelessness has been incredibly difficult in the West Midlands, but Change into Action, alongside Housing First, has been a real positive.”