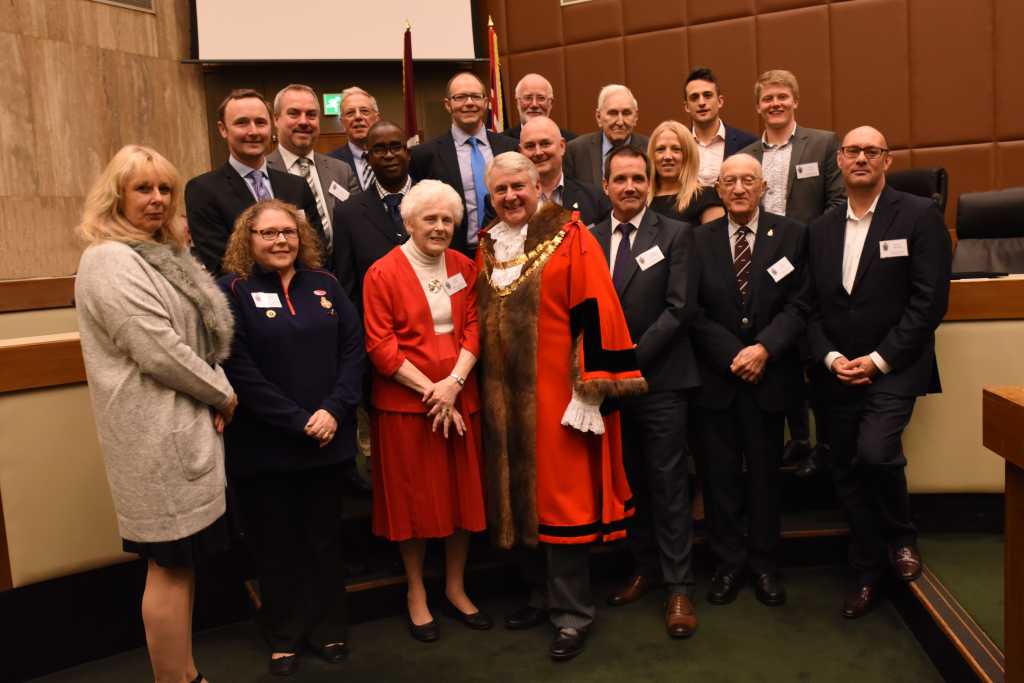 The event, which is in its sixth year, took place in the Council Chamber of Solihull Council’s Civic Suite.

The winners were invited to receive their awards from the Mayor of Solihull, Councillor Mike Robinson, and to meet representatives from local businesses and organisations.

The ceremony also featured a performance by students from Stagecoach.

Over recent months Solihull residents were invited to nominate people who have helped to make the community a better place. The judging panel of councillors, officers, representation from community groups and the main sponsor were then left with the tough task of reviewing the long list of nominees and selecting this year’s winners.

The Mayor said: “It was a lovely evening and one of the highlights of my mayoral year.

“I was delighted to have been able to meet these marvellous people and to thank to them for their dedication, hard work and enthusiasm in helping to make Solihull such a wonderful place to live.

“I am truly honoured to represent Solihull knowing we have so many inspiring citizens who willingly contribute to make this such a strong and caring community.”

This year’s winners are:

Tracie has devoted nearly 40 years to improving her village in Hockley Heath. From the age of 10 she has arranged and run numerous fundraising events for charities, local groups and local churches. She also ran the Hockley Heath Fete for five years donating funds to the Parish Council to turn an over grown wooded area into an open play area for young children to ride their bikes and explore nature. Funds were also raised to install a defibrillator in Hockley Heath making it accessible to the whole village. Tracie then arranged training sessions on the defibrillator for people in the village, which now has over 30 people trained in resuscitation. Her latest community involvement was to set up a Village Watch Group developing links with the local police and encouraging and helping other areas to do the same.

Set up by two commuters who dreamt of creating station gardens like the old days, this group has been working voluntarily for over 26 years. There are now 14 volunteers who all tend the floral displays at Olton Station funding most of the materials – plants, bulbs, compost, decorations etc. – from their own pockets. They work all year round – planting summer hanging baskets, tending spring planters with colourful bulbs and putting up Christmas decorations in the waiting room. The volunteers also pick up litter and keep an eye on vandalism.

Syd has worked tirelessly for many years as Chairman of the Solihull Pensioners Conference, a group which aims to help improve the quality of life for people during their retirement. He has been a great role model and community champion, regularly keeping pensioners informed of matters in their interests. Syd organises monthly meetings at Solihull Methodist Church Hall, arranges visits from guest speakers and organises various social activities for members.

Felix has supported hundreds of refugees and asylum seekers of all ages in Solihull. A review he carried out found that they were struggling with essential things like housing, employment, registering with doctors and registering children in local schools. With great commitment and determination he decided to form Entraide in 2010, Solihull`s first and only refugee support charity. Facing many obstacles and with limited funding to get Entraide off the ground, Felix worked tirelessly part-time with no salary for around two years. The organisation is now self-sufficient and employs two full-time members of staff.

Greg is a local photographer whose work has seen him win the ‘Light on the Land’ category of Outdoor Photographer of the Year, a competition which attracts more than 10,000 images from professional and amateur photographers across the globe. His winning photograph was taken on a trip to Iceland when a fleeting moment of stunning lights illuminated the Icelandic peaks. Greg also went on to be crowned Overall Winner at the Telegraph Outdoor Adventure & Travel Show in 2015. This year he won the ‘Live the Adventure’ category of the same competition. He offers a number of workshops and photo walks in the UK throughout the year and has released his first quality photo book entitled Mountainscape.

Peter is the founder member of Solihull Canoe Club which he started 28 years ago. The club has since grown to a current membership of more than 100 paddlers. Peter spends two nights a week during the summer, every Saturday and several Sundays a year training, organising or helping to run kayak events across the country. He trains people from the age of 8 upwards with the eldest being in their late 50s and another representing GB at World Championship level.

Sylvia has volunteered at Blossomfield Infant School four days a week for over 15 years. She listens to the children read, giving them time and space and building their confidence as early readers. Sylvia knows each child by name and they look forward to the time they share with her. She frequently goes above and beyond, and her commitment and devotion to the school community has enabled pupils to achieve a lifelong love of reading.

Sarah has devoted the last 20 years voluntarily as the Girls Brigade Captain at 2nd Solihull Girls Brigade at Lyndon Methodist Church. Her role involves leading a 40 strong membership group of girls aged from 4-18 years. She manages the Duke of Edinburgh’s award scheme and produces seasonal projects and materials for occasions such as Christmas Day, Mother’s Day and Father’s Day. Sarah is also involved in organising camping weekends, entertainment outings and countryside visits for all different age groupings of her troop.

Tom was awarded the Chartered Institute of Building Services Engineering (CIBSE) Education Award not only because of his academic achievements but also in recognition for his volunteering. He has been exceptional in his support for Solihull College and in sharing his enthusiasm for engineering and apprenticeships with young students across the West Midlands. He is now studying towards his degree at Coventry University and in his spare time fulfilling his other passion of canoeing. He has represented Great Britain in the International Canoe Federation Spring World Cup and competes regularly with his sights set on Tokyo 2020.