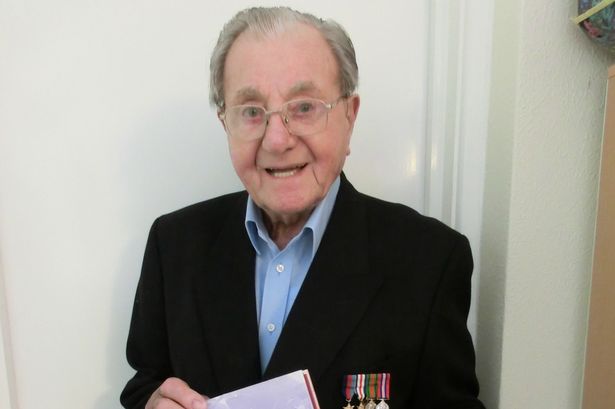 He fought bravely during WWII and now Solihull war veteran Ken Trueman has finally been laid to rest during a service at Robin Hood Crematorium.

The ceremony was attended by scores of people – including members of the Royal British Legion and Royal Air Force Association.

He is one of three veterans who will have a road named after them in the Solihull borough following a campaign by former Mayor, Joe Tildesley.

His daughter Stephanie Awad told the Solihull News: “We are very proud. His life was truly remarkable. He had medals galore.”

The former flight navigator’s plane was shot down ‘three times’ during the war.

During one of these episodes on 13th August 1944, Ken bailed out over Belgium.

He was shielded by the Maquis – the Belgian Resistance – and fought with them.

Stephanie said: “My mother thought she was a widow.

“But months later, he appeared on the doorstep in Acocks Green.

“She didn’t recognise him because he’d been living rough and eating acorns.”

The former carpenter and builder was taken ill on Boxing Day and died at Heartlands Hospital.

Stephanie added: “My father didn’t talk about his wartime exploits, but he was a Bomber Boy, big time.

“It was only in the later years that he felt the need to speak about what he did.”