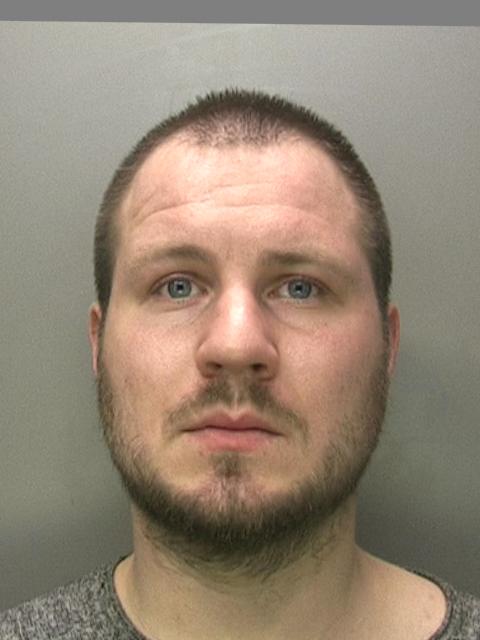 A man who shot a mum-of-two in her Solihull home has been jailed for almost 30 years after West Midlands Police tracked the gunman down hiding in a Birmingham flat.

Lithuanian national Martynas Okmanas calmly walked in through the front door of the family home in Dovehouse Lane,on the morning of 18 December last year having watched the victim’s husband leave on the school run.

Suspecting it was a robbery, the 51-year-old threw a Rolex watch towards the intruder – but without uttering a word he opened fire with a handgun as she sat in the living room.

One bullet went through her shoulder and another damaged her hand as she tried defending herself.

Luckily it’s suspected the gun jammed and gave the woman chance to flee to the safety of a neighbour’s house while Okmanas ran off to a waiting black BMW.

West Midlands Police detectives embarked on a painstaking trawl of the CCTV and ANPR camera network and managed to track the 3-Series – which was running on cloned plates – on a path to Northamptonshire.

And they also discovered that three days later the vehicle travelled down to Dover and boarded the Eurotunnel.

Detectives found a mobile phone number linked to the booking was also active on a route from Northamptonshire to Dover on 21 December.

It’s understood Okmanas returned to the UK on January 6 having spent Christmas with family in Lithuania – but covert police intelligence helped trace him to an address in Stratford Road, Birmingham, on 22 February where he was arrested.
Officers forced open a reinforced door and past a barricade of furniture before arresting him from the roof above a shop.

Okmanas, from Studfall Avenue in Corby, refused to answer police questions in interview but was charged with attempted murder – and at Birmingham Crown Court yesterday he was jailed for 28 years having been found guilty by a jury.

West Midlands Police Detective Inspector Kat Sibley said the motive for the cold-blooded shooting remains unclear. She added: “Incidents like this are extremely rare in Solihull… that’s what made it so shocking for people in the local community.

“We have some hypothesis for what was behind the attack but nothing concrete – and there are no links between Okmanas and the victim as far as we know.

“Nothing was stolen from the address, despite a Rolex watch being thrown at his feet, so our belief is this was a targeted attack on the woman.

“This case is not closed. We will revisit the investigation and if new information arises suggesting anyone else was involved in the shooting we will pursue them in order to seek justice for the victim. We wish her well in her continued recovery from both the physical and mental scars from this shocking episode.”

Anyone with information can speak to the independent charity Crimestoppers anonymously on 0800 555111. Callers won’t be asked for their names and calls cannot be traced.