The school parking problem causing fury in streets around Solihull 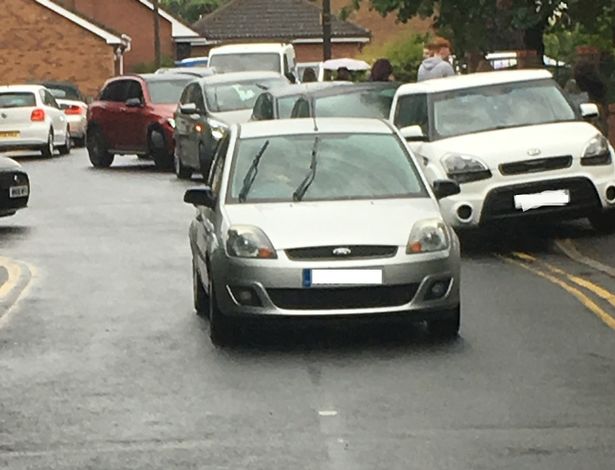 A row over plans to expand a primary near Solihull town centre has thrown the spotlight back on the issue of traffic problems linked to the school run. The Local Democracy Reporting Service spoke to some of the residents and looks at the background.

Leafy streets and high-performing schools are two of the biggest draws for families moving to Solihull.

But when the two things collide it can lead to frayed tempers, pavement parking and fears for road safety.

The most recent flashpoint has been in a set of roads a stone’s throw from the town centre, with the council agreeing that the planned expansion of St Augustine’s Catholic Primary should move to the next stage.

When proposals first emerged earlier this year, many neighbours warned that adding another 200 plus places would further fuel problems of jostling, blocked driveways and lengthy queues.

Campaigners, many of whom are veterans of a previous battle against flood lit football pitches at Tudor Grange School 12 years ago, swiftly mobilised against the plan.

Peter Cogley, the chair of the Whitefields Action Group (WAG), said residents were fed-up with the “sheer congestion” arising from several schools and colleges in close proximity; aside from St Augustine’s, Tudor Grange, Alderbrook, St Peter’s Catholic School and Solihull College & University Centre are nearby.

“You have five educational establishments, all of which have expanded in the last 30 years,” he said.

“And it’s not just the residents who are locked in our homes twice a day, the parents [are just as affected]. Have you got to have a serious injury before someone notices it’s a problem? It’s at breaking point.”

During a recent consultation, traffic and parking was described by council officers as “the most significant concern”.

Solutions floated in recent months include using playing fields to create a road and drop off zone/turning circle for parents, introducing a red route or insisting on one-way traffic around Dingle Lane and Whitefields Road.

Mr Cogley, who has lived in the suburb 30 odd years, said: “What we want is the current traffic situation managed and there’s all sorts of solutions, but it’s got to be an infrastructure change.

“We don’t want walking buses and we don’t want bus services because all of those could be cancelled.”

Another resident, Doug Davies, said: “It’s bad now. Add another 150 cars and it would be chaos for everybody.

“It’s gradually got worse and when something’s gradual you don’t really notice … but [the expansion] has woken us up to the current problem.”

Roger Fitton moved into the area 28 years ago hoping to have “a nice, quiet house to retire in.”

Describing current conditions, he said: “It’s absolute murder and if they double [the school] it would be ridiculous.

“When the school’s in you have got to allow a quarter of an hour to drive your first 300-400 yards.

“God help us if people need to get an ambulance or the fire brigade down there.”

Residents said they had no axe to grind with St Augustine’s but fear that the expansion of the primary – where more pupils are driven to and from the gates – will only add to existing issues.

The school, which had moved to its current home from a previous base in Herbert Road, is nonetheless seen by the education department as being in “a good central location” to accommodate extra places.

And the recent consultation document argues there is a need to expand.

“[The school] is over-subscribed by applications from families seeking a Catholic school place,” said the two-page flyer.

“The proposal to expand the school would provide 210 of the required places (an additional 30 per year) and will seek to meet the existing demand from Catholic families as well as the future requirement for primary Catholic school places from housing developments.

“The expansion will add one class per year over a seven year period.”

Growing populations and the strain they are putting on both local roads and services are familiar themes in wards across the borough.

Cllr Max McLoughlin (Green, Shirley South), who sat in on the recent meeting about St Augustine’s, said it was part of a wider problem of services coming under strain.

He has collated research which shows that today there are 1,149 fewer schools nationwide than in 2003. He argued new schools are “long overdue”, while expanding existing sites can have a negative impact on children.

One difficulty for local authorities, which was referenced during the debate, is that they no longer have the powers they once did to create a new school, with a shift instead to academies and free schools – outside of council control.

Cllr Ken Meeson, cabinet member for children, education and skills, has insisted that the council was looking at the parking issues causing tensions at locations around Solihull.

“Just about every school in the borough has traffic and parking problems around it,” he said. “I have acute problems in my own ward [Dorridge & Hockley Heath], I have to say.

“It is causing quite a lot of grief at the moment and we are looking for some sort of solution.”

He pointed out that his cabinet colleague Cllr Ken Hawkins, who holds the environment and highways brief, was continuing to investigate options around the School Streets scheme – which bans drivers from entering certain roads at peak times.

This project, initially introduced at three sites in 2017, is set to be expanded to three more in the new year.

While this has won support from some frustrated neighbours, the council has warned that the road layout means it won’t be suitable for every location and there are also concerns that police are not enforcing the restrictions as often as locals would like.

Last year, the LDRS spoke to a number of ward councillors about options to encourage more families to walk to school, although it is conceded that not all parents have the time.

Wider catchment areas for some establishments, including for faith schools, and poor public transport links can also prove problematic.