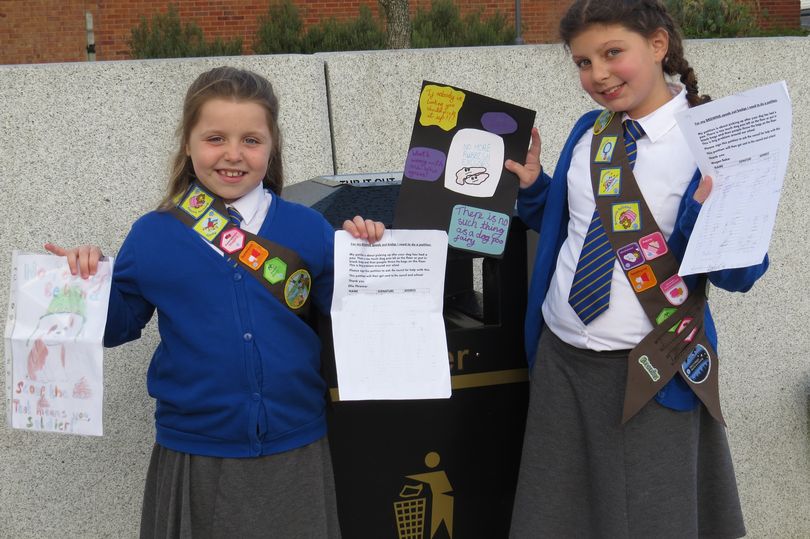 Lazy dog-owners who fail to clean up after their pets have been sent a strong message by two Solihull schoolgirls, who launched a campaign against the problem in their local area.

Megan Baker and Ellie Thrower, both aged nine, had encouraged friends, relatives and fellow classmates to sign a petition appealing for the council’s help.

The Year 5 pupils, from Bishop Wilson CofE Primary in Chelmsley Wood managed to collect around 70 signatures in a week and got in touch with their local councillor Chris Williams.

And within days of the petition being presented to Full Council, a new bin was installed a short walk from the school’s entrance.

The pair said they had been spurred into action by the state of the pavements and bags of waste being strung on fences or thrown into the bushes on nearby Dunster Road.

Ellie said: “We really didn’t like it, everybody stepping in it, it’s not very nice … they don’t realise they have got it on their shoes.

“It was really nice to do something for myself and the community.”

They also designed posters and wrote a song to support their campaign, which was part of their work for a Brownies ‘speaking out’ badge. In fact their efforts were such a success they were also awarded an extra “I’ve helped my community” emblem to sew onto their sashes.

“It started off as a badge and then it went to the council and now it is here,” added Ellie.

The girls said they would also see quite a bit of general litter in the area near Chelmund’s Cross village centre.

Megan made the point that waste which was bagged up then cast aside was a particular problem because plastic “doesn’t go away.”

Her mum Kay said the families were very proud of the girls for their efforts.

“They have stood up in front of assembly, they have been approaching people to get their support. Hopefully they have inspired other girls and other children that they can make a difference.”

After Full Council, Cllr Ken Hawkins, cabinet member for the environment and highways, said he wanted to provide the pupils with “a positive result” and the bin was installed the same week.

“They have gone to so much effort. When you are nine-years-old and you speak out about something like this you need to see that people do listen.”

Headteacher Des Ricketts was also full of praise for the pair’s “courageous advocacy”.

“They have listened to the girls’ concerns and this is a positive story,” he said.