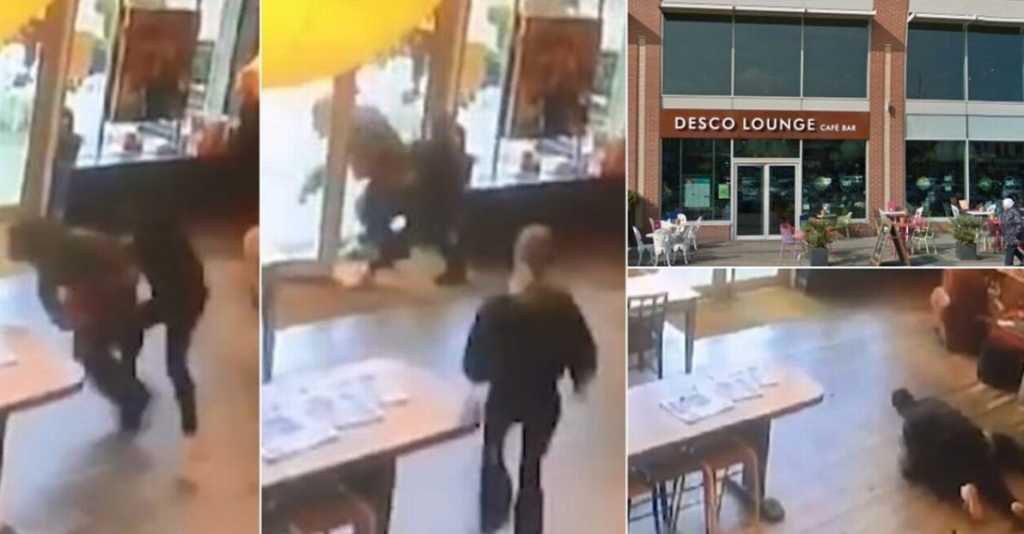 A heroic barista tackled a suspected thief – and held him down on the floor during a dramatic café confrontation.

Astonishing footage captured the employee as he bravely took the law into his own hands at Desco Lounge, Parkgate Shopping Centre in Shirley.

Just after 9am, a hooded crook reportedly swiped the charity donation box off the counter and made a run for the exit.

But on seeing the crime before him, the quick-thinking staff member stepped into action, rugby tackled the man and detained him awaiting the police to arrive.

In the one-minute clip, shared to social media, he is seen first grabbing the alleged thief before taking him down to the ground.

He desperately tries to flee, but he keeps hold of him even as he struggles at the front entrance.

The man tugs at the door with the worker gripping tightly onto his waist with both arms.

He pulls him back inside the café as another plucky staff member rushes over to lock the suspect inside in wait of the police.

The pair continue to wrestle near the entrance and the employee is forced to floor him fully this time.

He is seen holding the suspect on the floor for at least 22 seconds before the extended version of the video cuts off.

Police arrived at the scene twenty minutes later – at 9.24am – but the man had been let go empty-handed.

Officers praised the actions of the staff, though advised members of the public not to put themselves at risk.

The charity box was for the Make a Wish foundation – a non-profit organisation helping to make dreams come true for terminally ill children.

A spokesman for West Midlands Police said: “We were called to Desco Lounge in Shirley at 9.03am on 21 November to reports that a man who had tried to steal a charity collection box had been detained and locked in the premises by staff.

“Officers arrived at 9.24am, but the man had been released and had left without the tin.

“The incident is being treated as attempted theft and anyone with information has been asked to get in touch, quoting 20SH/274920R/19, via Live Chat at west-midlands.police.uk , or via 101.

“We are always grateful for the public’s help, but we would never advise anyone to put themselves at risk when dealing with a suspect.”