90-year-old Shirley pilot learned to fly when he retired 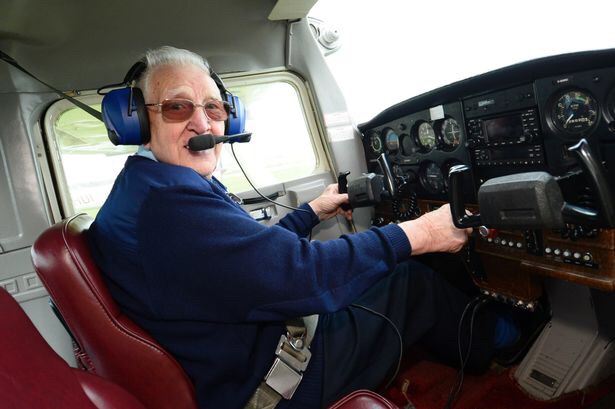 Paddy Elliott is still flying high at the age of 90 as one of the world’s oldest pilots.

The sprightly nonagenarian from Shirley celebrated his landmark birthday on St Patrick’s Day and is still taking to the air – having only taken up flying when he retired at the age of 64.

Mr Elliott also still works five days a week manning the operations desk at South Warwickshire Flying School at Wellesbourne Aerodrome – where he has been a member since 1989 and more recently a director.

Born Alfred Ernest Elliott in Shirley in 1925, Mr Elliott is looking forward to continuing as a pilot after recently passing a medical giving him the all-clear to carry on.

Although he served in the Royal Air Force and has always had an interest in planes, it was only when he reached retirement that he had a chance to learn how to fly.

Mr Elliot said: “I have always been interested in aeroplanes, ever since I was a kid, but it wasn’t until I retired that my flying career started.

“The missus said to me, ‘What are you going to do now?’ I said, ‘Not a lot’, but she saw something about light aircraft night school classes and I was really interested.

“The classes were run by someone who had their own aeroplane at Birmingham Airport and he asked if anyone wanted to go flying.

“I said I was interested so I had an hour’s flying in Wales 25 years ago and that was the start.

“I did my first flight that December and got my private pilot’s licence the following September. I was nearly 65 when I got it.”

It was as a young apprentice at Austin that he first came into contact with aeroplanes, as the car-maker produced components as part of the war effort.

At the end of the war Mr Elliott was called-up for national service and served in the RAF.

On his return to civilian life, he re-joined Austin and went to work in the press tool department.

He later became a supervisor and subsequently covered various production activities, from engine components to body and vehicle assembly.