Carjacking at Tesco in Sheldon 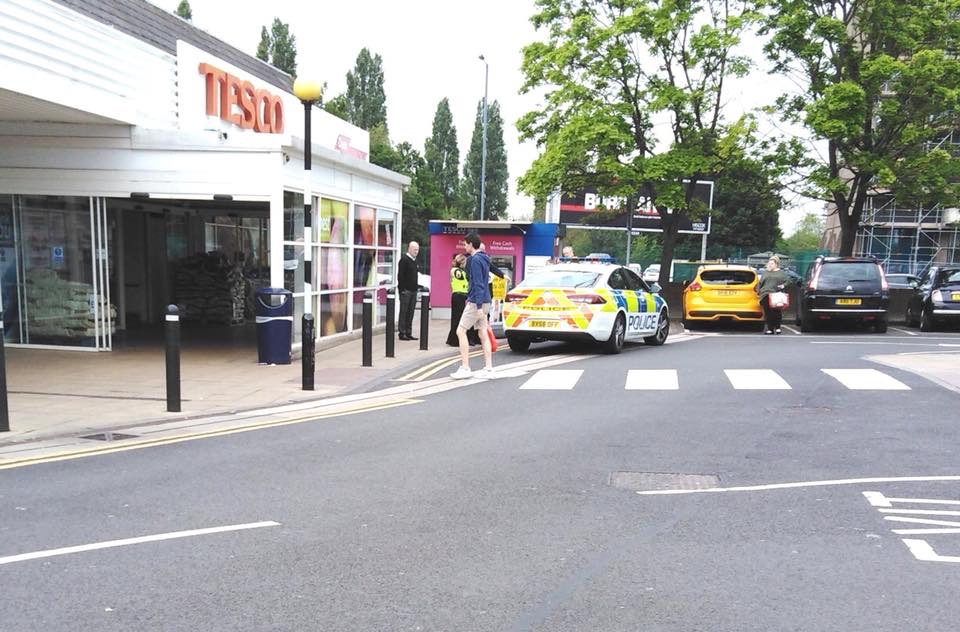 A carjacking has taken place this afternoon (20 May) at Tesco in Sheldon. The incident happened around 2.40pm at the store on Coventry Road.

An onlooker told SU: “Broad daylight carjacking just took place at Tesco in Sheldon. 3 or 4 people in balaclavas just stole a blue BMW, the driver was attacked but managed to escape while being hit with a baseball bat.

“Shocked to see this happen in broad daylight, and for them to drive off at extreme speed during the school rush hour was awful.”

A silver VW Golf was reportedly seen speeding away from the scene.

A witness told Birmingham Live that the man was approached by two men who demanded the man ‘give us your f*****g keys’ as the victim fell to the floor.

The man, who was described as possibly in his 50s, dropped his keys before fleeing for safety into the store as the men sped off in his blue BMW.

A 42-year-old who saw the harrowing incident unfold said: “I was walking out of Tesco and I heard some shouting from behind me, it sounded aggressive.

“I turned around and saw what I thought was a fight.

“I saw about three guys. There were two guys stood by the silver Golf and the older guy just fell to the floor, it was like his legs just gave way.

“I could see he was in trouble.

“The two guys stood by the car had balaclavas on. One of them was holding something, it looked pointy, I can’t be sure.

“Then there was one guy stood over him and I’m sure I saw him hit him.

“He was shouting but I can’t be sure what he was saying.

“The guy who was on the floor was less than a metre from the Tesco entrance.”

The witness said the man then stood up and was on the phone to the police who arrived within minutes.

He said: “I asked if they had hit him but he seemed OK. He was unscathed. He was in shock.

“I saw the car speed around the car park at a million miles an hour. It then shot off up towards Olton, there wasn’t a thought for pedestrians.”

“About half an hour later the police helicopter was over the Warwick Road.”

A WMP spokesperson said: “Police are investigating reports of a carjacking in Tesco car-park, Coventry Road in Sheldon this afternoon (20 May).

“At around 2.40pm a man in a blue BMW was approached by two men from a silver VW Golf, one of whom was holding a baseball bat.

“They demanded the keys to his car, the man dropped his keys and ran towards the supermarket. The two men picked up the keys and made off in both cars.”

If you have ANY information or witnessed the attack, contact the police quoting crime reference 20BE/119529C/19.