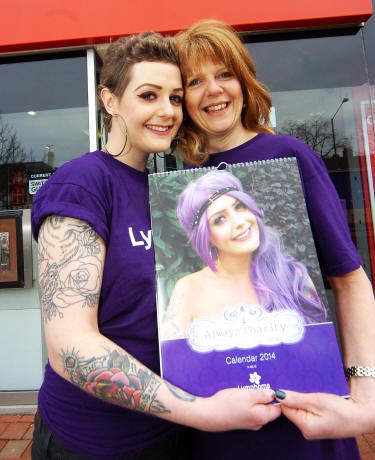 A ‘wonderful and amazing’ mother has been handed a top award from the Lymphoma Association for the support she gave her daughter when she was diagnosed with the disease last year.

Anne Rendle, mum of business woman and fundraiser Charity Hewitt, from Hockley Heath was handed a Beacon of Hope Award in London at a glamorous ceremony thanks to her daughter.

Unbeknown to Anne, Charity put her name forward to the Lymphoma Association and told them how inspirational Anne had been during her time of need.

In her nomination Charity said: “Without my mum pushing me constantly to overcome my negativity and pushing me to do things, I wouldn’t be where I am now.

“I admit we have had some tough times throughout the past year but don’t we all; cancer doesn’t have to create that for us.

“The emotional effects of cancer not only affect the individual but the people surrounding them; it’s not easy.

“Recovery isn’t only about recovering from chemotherapy; it is about remaining positive and coping with the mental recovery.

“Everyone needs help with this and I will be forever thankful to my mother for helping me start this journey.”

Not only was she a ‘rock’ for her daughter when she was coping with both the physical and emotional effects of her illness but she also helped set up and run fundraising company Always Charity to help others in a similar situation and to help Charity beat the chemo blues.

The pair make and sell vintage inspired greetings cards and tea cups with a portion of the profits going to the charity.

And thanks to their coffee mornings, saucy calendar and other fundraising events they held across the borough they have raise nearly £19,000 for the Lymphoma Association.

Humble Anne said she very surprised when she received the letter saying she had won the prestigious accolade.

She added: “I wasn’t expecting the letter or the award – it was a complete surprise and I was very overwhelmed.

“What Charity did was a really sweet thing and I am very grateful to her for nominating me.”

Anne was presented with her by journalist and presenter Alice Arnold at award ceremony which took place during Lymphatic Cancer Awareness Week in London.

This was the second trip the pair made to the award ceremony in as many years.

Last year Charity was handed a Beacon of Hope Award for her inspiration to fellow patients, doctors, nurses and her family and friends.

Charity said: “When I got my award last year I thought my mum should have been up there with me as she’d supported me so much.

“So this year I decided to nominate her myself.

“It was really hard keeping not only that I had nominated her but also that she’d won a secret from her but it was great to share this moment with her.”