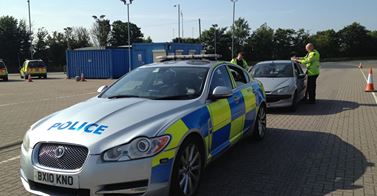 Not only will they help local officers overcome practical obstacles like language but, working out of an advanced event management centre in Birmingham which is acting as a national hub for the UK-wide push, they can tap into their home country’s police systems to verify details supplied by foreign drivers they question.

Last July’s inaugural Operation Trivium involved 31 police forces across the country. More than 200 people were arrested – for crimes ranging from motoring offences to human trafficking, money laundering, GBH and fraud – and around 550 cars seized. And CMPG Superintendent Paul Keasey, who is leading the operation, said the action sends out a clear message to criminals from overseas.

He said: “Foreign nationals who commit crime in the UK, and who use the road network to facilitate that criminality, may feel they are untouchable by UK police forces – but operations like this demonstrate our commitment to cross-border policing and that borders are no barrier to justice.

“I’m delighted to again welcome colleagues from police forces in Eastern Europe. They will join us on road-side operations and their support is invaluable: they will have instant access to intelligence systems at home and will be able to question drivers in their mother tongue, assess their demeanour and attitude, and better detect if they are co-operating with officers.”

It is estimated there are, at any one time, up to 30,000 foreign-registered vehicles on UK roads.

Operation Trivium’s week of action will see Automatic Number Plate Recognition (ANPR) intelligence checks on foreign-plated vehicles – and the cameras will immediately tell police if the car is linked to criminality or uninsured. Also involved in the operation is Tispol, an organisation established by police forces across Europe to reduce deaths, serious injury and crime on EU roads.

National lead for roads policing, Chief Constable Suzette Davenport, added: “The UK road network is being used by criminals to facilitate their criminality while avoiding detection.

“Their actions have a terrible impact on the communities they pass through and the businesses they target. This operation seeks to disrupt such activity by identifying perpetrators, detaining them and ultimately bringing them to justice. We want to make the UK roads network a hostile place for these criminal gangs and protect the public from the devastation they can cause.”

“We’re working with colleagues from Europe to identify, locate and tackle these gangs and use the best intelligence and resources we have to detect and prevent crime and bring those responsible to justice. In the past we have identified criminals with a long history of offending.

“These types of ‘volume’ offences – shoplifting, fraud, metal theft and theft from vehicles may not appear particularly serious but we know through our dealings that they do have a very damaging effect on businesses.

Koen Ricour, president of TISPOL, the European Traffic Police Network, identified the need for swift exchange of information between participating law enforcement agencies to maximise the impact of this kind of cross-border road policing operation.

He said: “Good planning, effective co-ordination and clear lines of communication between us all will ensure an efficient information flow during this kind of operation. The result is better targeting of criminal gangs and better protection for European citizens.”

Central Motorway Police Group provides a regionalised policing service for the motorways of the West Midlands, West Mercia and Staffordshire force areas. Operating from three bases around the region CMPG is made up of around 140 police officers and support staff, who provide patrols and wider policing of the Midlands motorways. CMPG is responsible for patrolling the Midlands motorway network stretching south from Cheshire on the M6 to the Welsh borders on the M50.

Currently, the CMPG has responsibility for:

Working closely with the Highways Agency and other partners, CMPG patrols over 400 miles of motorway to keep road users safe and prevent criminals using the motorway network.

The network they police is one of the busiest in the country with approximately 500,000 vehicle journeys made per day.