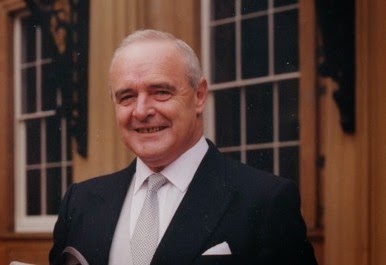 A new road in Chelmund’s Cross Village Centre has been named after the area’s long serving GP, Richard Pomeroy MBE, who sadly passed away last year.

Richard or ‘Dick’, Pomeroy moved into Chelmsley Wood in the late sixties and set up his practice as the area was being built. His practice in Chelmund’s Cross (formerly known as Craig Croft) steadily grew as the population increased. Over the years more services were offered and the practice became a clinic, or almost a mini-village hospital!

Dick was awarded an MBE on 12 June 1993 by Prince Charles for his services to medicine and his community.

The much loved GP retired in 2008 and following his death in 2013 local residents and community groups suggested that the new road, built as part of North Solihull Partnership’s investment in the Chelmund’s Cross Village Centre development, should honour this long-serving pillar of the community.

Michelle Pomeroy, said: “Dick loved the people and loved working in the area. He built a wonderful practice that served the community well. And while he was proud of his MBE, I know having this road named after him would have been a greater honour in his eyes.

“Speaking on behalf of the family I can only say how delighted we all are that the community he served for so long has found such a lovely way to honour him. This will be a lasting memorial to a lovely man and we thank you all whole heartedly.

Pauline Allen, Chair of the local Residents Interest Group, said: “It was a unanimous decision that when we knew we needed a new road name that we should choose to recognise Dick Pomeroy’s work in this area by naming it “Pomeroy Way”.

Wendy Earl, Dr Pomeroy’s Secretary, said: “I’m so pleased that we have been able to find a way to commemorate “Pom”, I know he’d have been chuffed to have a road named after him.”