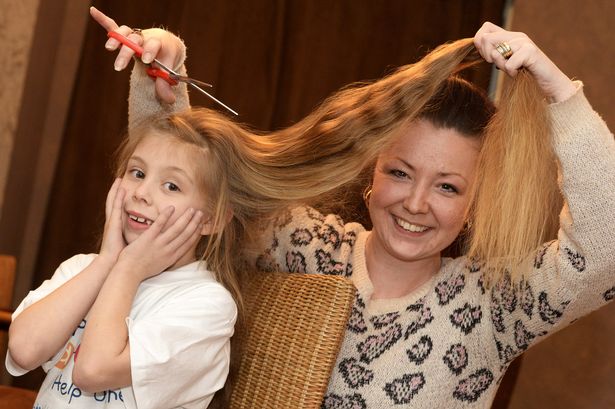 Six-year-old Brooke Higgins has never had her hair cut but she has been so inspired by the example of brave Harry Moseley that she’s going under the scissors.

The Marston Green Infant School pupil, who’s hair reaches her knees, has now decided to have it cut to shoulder-length for the Help Harry Help Others charity – but the off-cuts will not be wasted and will instead be used by the Little Princess Trust, which makes wigs for young cancer patients who lose their hair during treatment.

“I decided to have my hair cut because I want to help people who are poorly,” said Brooke, from Chelmsley Wood. “I’m excited, I’ve only ever had my fringe cut before. I picked the Harry Moseley charity because it is a good cause and it is a local charity.”

Mum Amy said Brooke thought of the idea herself. “She said she wanted to help people and came up with the idea of having her hair cut, she seems really excited about it. Her hair is so long that it reaches the back of her knees at the moment. It will certainly be a lot easier to manage when it is shorter.”

Brooke will be having her locks cut off on Friday 21st February at the Village Salon.

Help Harry Help Others is the charity inspired by Sheldon schoolboy Harry Moseley – it aims to make a difference to young cancer patients in memory of Harry, who raised more than £500,000 for Cancer Research UK before he died of a brain tumour, aged 11, in 2011.