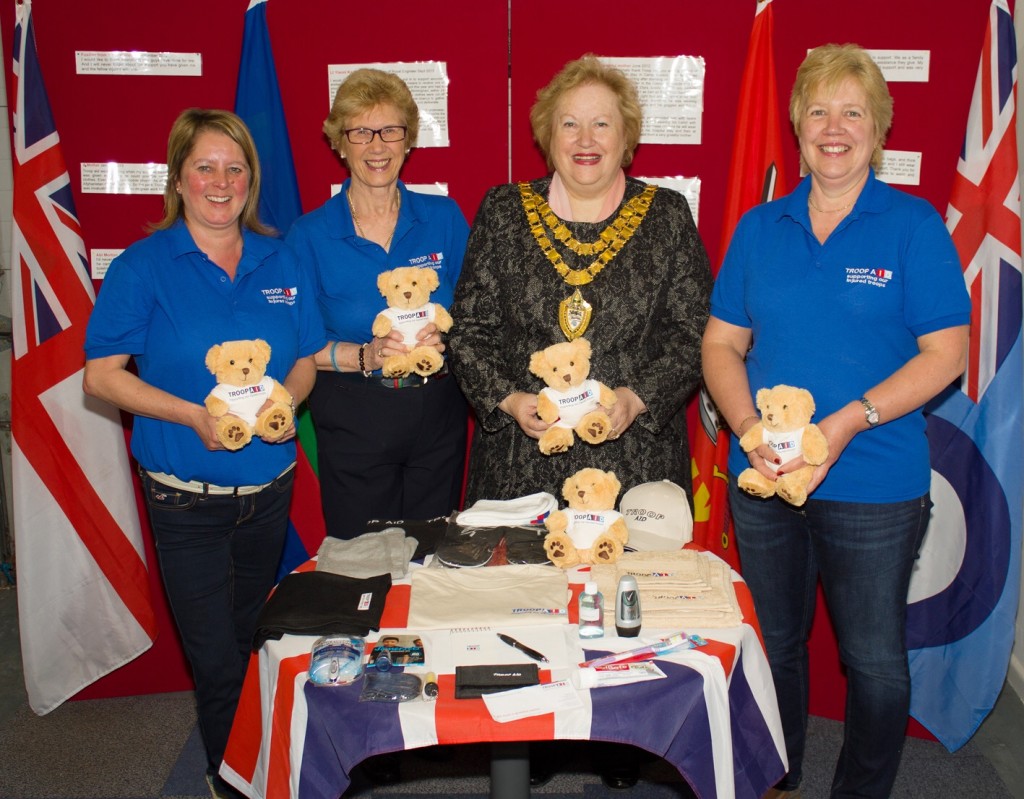 The Mayor of Solihull Councillor Mrs Kate Wild visited the Troop Aid headquarters to see for herself work the Solihull based charity does to support injured service personnel and to meet ‘Brave’ the Troop Aid bear.

When troops are injured on exercise or return injured to the United Kingdom from war zones, they arrive back without their personal effects or clothing. The Mayor was able to hear how the charity supports injured service personnel by providing each with a Grab Bag of basic essentials.

Al Sutton, co-founder of the charity explained: ‘‘Brave the bear dates back to when troops were arriving at the Queen Elizabeth Hospital in Birmingham, having been injured in Afghanistan.

“One young soldier told a member of the Troop Aid staff that not only had he been injured, but in combat he had lost the teddy bear he had had since he was 2 years of age.

“Troop Aid was able to give him a replacement. And when the other injured soldiers saw he had a bear, they all wanted one!’

Grab Bags are currently being used in the Field Hospital in Cyprus, the Queen Elizabeth Hospital in Birmingham and the Ministry of Defence Hospital Units in Plymouth, Portsmouth, Frimley Park Hospital in Camberley, Medical Centre ITC Catterick Garrison and MDHU Northallerton. More recent deliveries have been to Kenya, Mali and to Sierra Leone.

The Mayor of Solihull Councillor Mrs Kate Wild said: “I have followed the work of Troop Aid with great admiration since it first started.

“It gave me particular pleasure as The Mayor of Solihull to host the ceremony in the Civic Suite last September when the charity was awarded The Queen’s Award for Voluntary Service – an award considered to be the equivalent of an MBE for a voluntary organisation. It really was without doubt an award for a job that continues to be very well done.”

A registered charity, Troop Aid’s patron is HRH The Prince of Wales.

Troop Aid is funded by donations and receives no government support. Anyone interested in finding out more and to learn how they might offer support should telephone: 0121 711 7215 or go to their website at: www.troopaid.info.