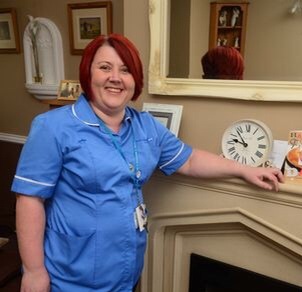 When Angie Allbones repeats her precious vows to celebrate her 25th wedding anniversary next year, the words will just roll off her tongue.

For the first time she said “I do” to hubby Nigel, the mum-of-two had to get tipsy so that she wouldn’t stammer and stutter her way through the memorable moment.

Now though, after signing up to a special programme to control the speech problems that have plagued her life since she was five years old, Angie can finally speak confidently.

“For the first time in my life I will be able to eloquently say my vows to Nigel,” says the Solihull nurse. “We will be renewing our vows in October next year and it will be a really special occasion for us.”

The 45-year-old nurse’s nightmare first began when she was just five years old. Her grandad Harold Daw, who she was very close to, died aged 66 and medics believe the shock caused her to start stammering.

“I was very close to my granddad,” she adds. “And I started stammering from then on. Initially doctors thought I would grow out of it. I saw speech therapists, but nothing seemed to help. I was struggling with every word.”

Angie became, what she calls a ‘covert stammerer’.

“I had to develop a huge thesaurus of words to substitute troublesome words. I couldn’t say T, D, G, K and hard C. My date of birth was frequently changed to a date I could say.”

School became difficult for Angie but not because of her fellow classmates.

“One particular teacher picked on me very badly because of it. She would mock me in front of all of the class. I didn’t talk very much at all and became shy. It was frustrating for me and upsetting.

“She would get me to read out loud and constantly knocked me in front of the other kids. But they didn’t react. I got on with them and was never targeted by any of the children.”

When Angie left school she thought that would be the end of the bullying, but when she went for an interview at teacher training college she was left horrified by her interviewer.

“He told me ‘we couldn’t possibly have you with that disgusting stammer’. I was 18 at the time and mortified. I then applied for a nursing course and I was upfront about my condition. But they didn’t seem to have a problem with it at all.

“Ever since I’ve used it to my advantage at work.” Over the years, she learned to deal with certain sounds which caused her more problems than others.

The word “Daysaver” proved so problematic that she would often overpay for a bus ticket to avoid saying it. She would also spend half an hour looking for tricky-sounding items in a supermarket, rather than asking where they were.

And she even tried to change her son Jim’s delivery date: “I asked my obstetrician to let me go another day before my planned C-section so my son would be born on September 30, because the 29th was so hard to say.

“She asked me why and I blubbered something about him being born on a Friday would be better – I sounded like a loon! He was delivered on September 29.

The turning point came when she called in sick for work, rather than give a presentation.

She decided to act by signing up for the McGuire programme, which looks at both the physical and psychological aspects of stammering, focusing on deep breathing.

“I had come into some money from my nan’s will and saw an article about the McGuire programme,” she explains.

“It was in 2005. I started the programme and it taught me a new way of breathing.

“You use your diaphragm, like the way an opera singer does. It’s called costal breathing.

“I have now been able to perfect the technique so you can’t actually hear me doing it.

“I wake up very early in the morning and warm up, practising my breathing so that I can get through the day without stammering.

“I have never been a fluent speaker, but now I am eloquent.

“It does mean working on it every day though.

“Sometimes I will have to take a few minutes out in the middle of the day to exercise my breathing. It’s a bit like a sport.”

As well as using the technique herself, she also mentors hundreds of other sufferers after training as a McGuire course instructor.

“The programme has changed my life beyond recognition.

* The next meeting will take place on 19th July at Acocks Green Methodist Church. For more information log onto: www.mcguireprogramme.com