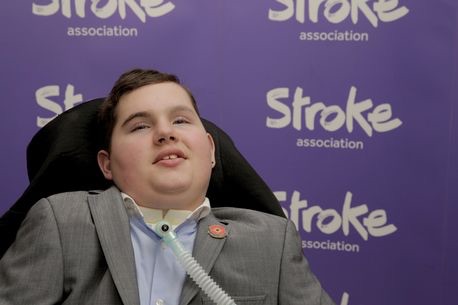 An inspirational teenager left paralysed by a stroke at just 14 has been recognised for his bravery.

Joseph Lockington, now 17, was struck down in January 2012 as he prepared for a new term at Langley School.

He spent 15 months recovering in Birmingham Children’s Hospital before returning home – where he needed 24-hour care and a ventilator to help him breathe.

Joseph, a keen musician before his illness, was honoured in the Stroke Association’s Children and Young People’s Courage award category.

Regional fundraiser Jodie Smith, who nominated him, said: “Joseph was one of the most inspirational people I have met in all my time here.

“His attitude to life was great and his personality shone though.

“Joseph would not let circumstances stand in the way of him living his life surrounded by friends and family.

“He faces many daily struggles yet when I met him, he was just wonderful. He will leave a lasting impression with me.

“I think he must make his parents extremely proud.”

Joseph’s goals over the next few years are to finish his GCSEs, use technology to help him make music and to have a holiday.

Sue and Dai Phillips raised more than £12,000 after taking part in a 400-mile cycle from the Atlantic to the Mediterranean to help pay for a new music room.

And his friends organised gigs to raise extra cash.

Joseph was highly commended at the awards, staged at the Hilton Metropole hotel.

His parents Karen and Andrew Lockington, who have three other children, previously said they were “overwhelmed” by the support they had received.