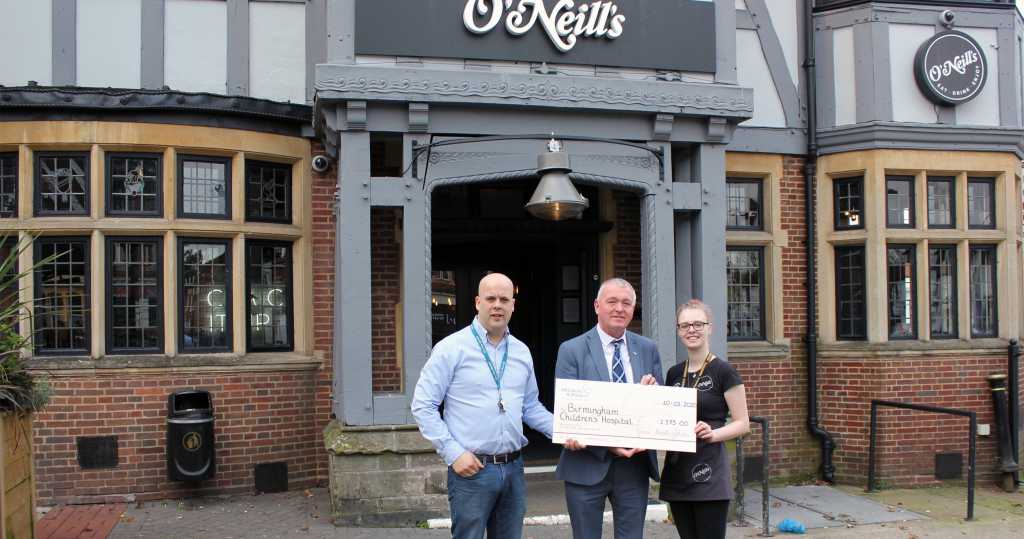 An iconic West Midlands fundraiser has received the support of a Solihull pub to help raise funds for Birmingham Children’s Hospital Neonatal Unit.

Danny Ryan MBE, who has successfully raised a total of 3 million pounds for various charities across the West Midlands, was invited to O’Neill’s in Solihull to be presented with their latest donation to Birmingham Children’s Hospital Charity in support for Danny’s continued charity efforts.

Danny, who is an ambassador for the hospital’s charity, was handed a cheque for £2,175 which was raised solely through a voluntary £3.00 customer entry fee on Christmas Eve. 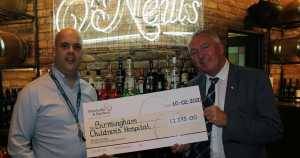 Luke Billingsley, Manager of O’Neill’s, said: “We were aware that most other bars and pubs were charging an entry fee on Christmas Eve, so we decided that we would too. But with all money raised going to fund Danny’s latest mission.”

Speaking to Solihull Updates, Danny said: “I have known Luke personally for six of the twenty years I have been an ambassador for Birmingham Children’s Hospital and would like to thank Luke, his staff and the customers of O’Neill’s personally for getting behind this appeal. The support I continue to get from Luke and other pubs within the area inspires and empowers me to continue what I’m doing.”

Danny’s current quest is to raise £16,500 to fund a new incubator and monitor for the hospital neonatal unit, which the money O’Neill’s have raised will facilitate.

Luke continues: “Danny has a high profile in the area with Birmingham Children’s Hospital having touched everyone in Solihull in some way. We will continue to run events to support the hospital’s charity as a thank you from us, not only as a business but as parents and a community. A personal thank you from my team, myself and all the kids around the world.”

With the UEFA Euro games just around the corner, we can anticipate plenty of opportunity for Luke and his team to engage with the community further in their efforts to raise even more money for Danny’s cause.

Whether you are looking to take advantage of the new boardroom for work conferences and events, attending the T and Toddlers sessions on a Monday or Wednesday morning, for a cup of tea and a catch up, or just looking to sit back and relax after an afternoon of shopping, you are guaranteed a warm welcome at O’Neills.