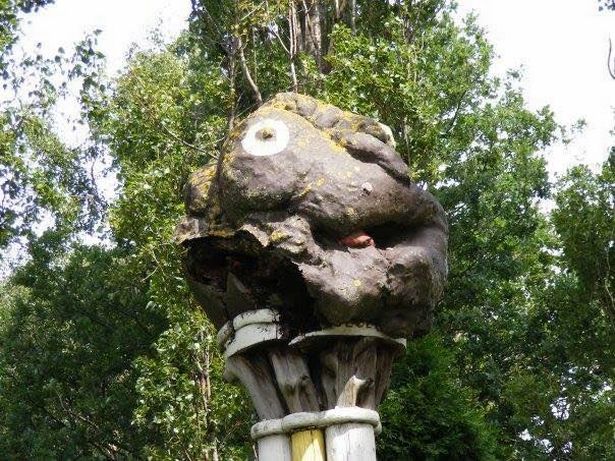 Could a sculpture affectionately known as ‘The Bogey on a Stick’ be returning to Chelmsley Wood?

A local group is continuing to investigate the possibility of recreating the piece of public art, which was a prominent landmark on the housing estate for several decades.

It was eventually removed by the council in 2010, amid concerns that the rotting timber posed a health and safety risk.

Talk of “bringing the Bogey back” first surfaced six years later, with Chelmsley-based social enterprise Gro-Organic trying to organise efforts to install a new sculpture in tribute to the much-missed original.

While the campaign has been on “the back-burner” more recently, the group this month confirmed it still hoped that the idea could become reality and that a new piece would once again take pride of place in Meriden Park.

Sarah Gill, Gro-Organic’s founder and chief executive, said that she had been overwhelmed by the level of interest when proposals started to take shape four years ago.

“I started to get emails from as far away as Australia from people who had moved away from Birmingham and heard the Bogey had been taken down and were asking ‘is there anything you can do to bring it back?’.

“If it were to happen it would be a wonderful thing for the community.

“There are many people my age – in their early 40s – who will remember going there as little children.

“People used to use [the sculpture] as a landmark. I’ve heard people say ‘I always used to know when to get off the bus when the Bogey came into sight’.”

In 2016, Gro-Organic had secured a National Lottery grant to hold a series of workshops with local schoolchildren to discuss options.

These sessions were very much in the spirit of the original project, in the early 1980s, during which an artist had collaborated with youngsters who lived on the estate.

The sculpture had been crafted from the wood of a 200-year-old Wych Elm, which had grown nearby, and depicted the Anglo Saxon landowner Ceolmund (or Chelmund) – from whom Chelmsley Wood derives its name.

The historical figure later rose to prominence after a successful campaign to rename the redeveloped #CraigCroft shopping centre #ChelmundsCross and the launch of an annual Chelmund’s Day event.

It is unknown which resident or residents first coined the Bogey on a Stick nickname, but it was used almost universally by the time that the piece was pulled down.

Sarah said that there had previously been talks with #Solihull Council about a new sculpture but a significant grant would be needed to fund it and there would be a considerable amount of work involved, including the design of the artwork and securing the various permissions.

She suggested that a steering group could be set up to oversee the project, insisting it was essential that local residents were involved.

Cllr Chris Williams (Green, Chelmsley Wood) said it was “brilliant” so many projects to promote the area’s heritage were being taken forward by the likes of Gro-Organic, the B37 Project and the Three Trees Centre.

“It gives an area a focus and something to talk about,” he said.

He had previously suggested a piece of public art could have been installed to mark the official end of the North Solihull Regeneration Partnership, and act as “the cherry on the cake.”

“If you look at Spitfire Island on Castle Vale, it gives the people of that area the chance to say ‘yes, this is what this area is famous for’ and it’s become their Angel of the North.”

Sarah has said she would be keen to hear from anyone who has the expertise to assist with ‘The Bogey on a Stick’ project. If you think you can help, email: sarah@gro-organic.co.uk