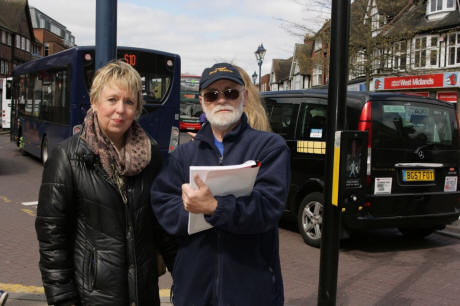 Lorely Burt has added her voice to fears the new Solihull Gateway project will create access problems for blind people.

Solihull’s MP said planned improvements in the Station Road and Poplar Road area of the town centre to make it more accessible and convenient and to ‘improve and update the look of the area’ posed serious risks.

“I very much hope that Conservative councillors will listen to advice from local charities and live up to their responsibilities to vulnerable people in Solihull,” she told us.

“The last thing anyone wants is a preventable accident at the new Solihull Gateway development.

“I am very much on the side of the charities on this. The plans must change to accommodate blind and partially sighted people’s needs.”

Council and transport organisation Centro, its partner in the scheme, believe the works will also help support the town centre’s economy and encourage investment in the town centre. But one critical part of the project, to be decided in June or July, has come under fire – branded terrifying and a potential death trap.

Charities for the visually impaired and blind, along with Guide Dog users, have slammed the proposals for ‘shared access’ crossings. These areas will see the removal of kerbs and the continuation of pedestrian zones across the road, which will still be used by traffic.

In Solihull, one of the new shared access areas will be at the end of the High Street at the corner of Station Road and Poplar Road where the majority of buses into the town travel.

The traffic light controlled crossing would be removed and the road would be replaced by a raised area identical to the paving used on the High Street.

Rebecca Swift, Regional Campaigns Officer for the RNIB, added: “Local charities like ours are deeply concerned that the current plans will create safety and access problems for blind and partially sighted people.

“Solihull Town Centre should be safe and accessible for everyone.

“We look forward to working with Lorely Burt to put pressure on the council to improve on their plans.”