The ‘gateway’ island to Birmingham dubbed a ‘disgusting mess’ 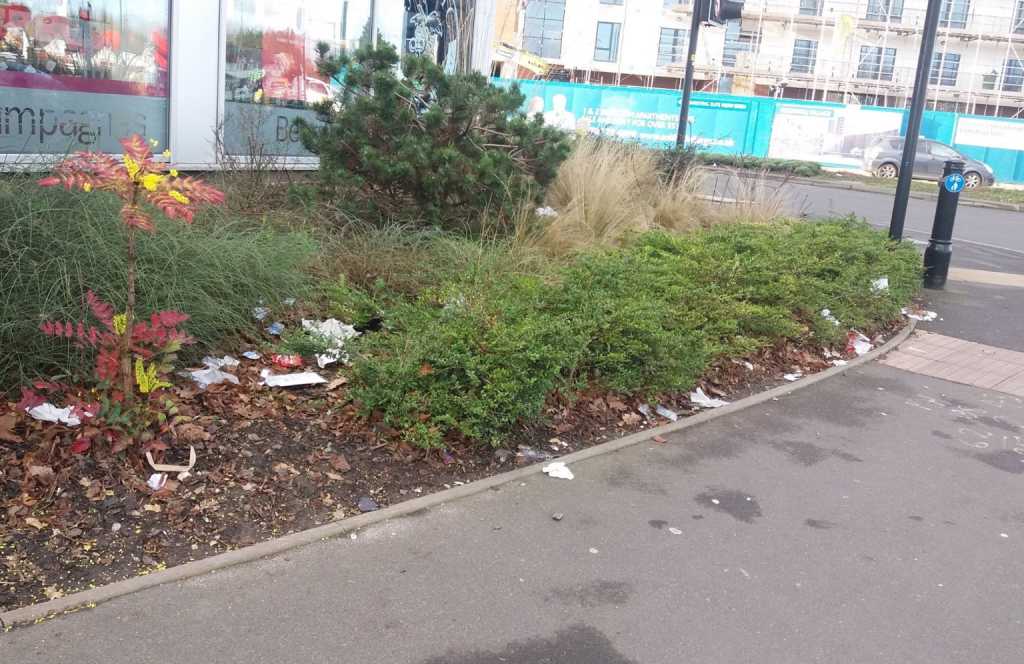 “Disgusting” litter thrown from car windows and dropped by shoppers is blighting one of the key gateways into Shirley, a local volunteer has said.

Resident Emma McGann, a member of the Friends of Shirley Park, said that it had recently taken her 80 minutes to clear-up all the rubbish strewn around Poppy Island, on Stratford Road.

She said that the build-up of plastic, polystyrene, bottles, cans and other throw-away items posed a risk to wildlife and tarnished an area which is “the first thing” people see entering the borough from Birmingham.

Solihull Council has admitted the prominent spot had not seen the usual level of activity over the Christmas period, which may have made matters worse, although Ms McGann has called on passers-by to clean-up their act.

“It’s a bit of a wind tunnel from all directions and we have got a lot of people littering, which is then being blown down the Stratford Road … and people are throwing things from cars,” she told the Local Democracy Reporting Service (LDRS).

“[I would say] just take it with you. You are in a car, travelling somewhere else, and there will be a bin at the other end. Just use that.”

She praised the council for acting quickly after concerns were recently raised, but suggested there would perhaps need to be a wider push to deal with the problem going forward. After the issue came up, several ward councillors waded into the debate on social media.

Cllr Tim Hodgson (Green, Shirley West) has argued there could be more scope for working with local takeaways – some of whom already contribute to litter picking exercises – and neighbouring Birmingham City Council.

“We all want Shirley looking clean and tidy for everyone to enjoy,” he said.

Cllr Karen Grinsell, a Shirley East councillor and deputy leader of the council, indicated that the area would be a “top priority”, after acknowledging there had been some issues over the festive break.

A Solihull Council spokesman said: “Poppy Island on the Stratford Road in Shirley is on our maintenance schedule to be cleared of litter five days a week, Monday to Friday.

“Over the festive period we experienced a couple of operational issues, which meant that the area was not cleared every day and as such, people may have noticed an increase in the amount of litter there.”

Wardens tasked with tackling littering and dog mess have conducted some patrols in the Stratford Road corridor, a report this week confirmed.

Enforcement officers, contracted by the council from the private firm NSL, have been in place since February 2019 and have handed out 77 penalties in the borough.

Although, the number of fines has started to tail-off as awareness of the scheme spread in Solihull town centre, the original area of focus, which is why there has been activity in some other “hotspots”.

To date, the penalties have generated £3,825, although this is outweighed by costs of £8,182, with “considerable” admin and back office expenses.

Council officers admit it appears unlikely the scheme will be self-funding in the way it was originally hoped and, should the pilot be made permanent, other funding may be needed to support it.

Caroline Naven, head of neighbourhood and regulatory services, said: “[The financial position] does not mean that the work should not continue as it would seem from the early work so far that the presence of enforcement officers is an effective deterrent.”